What Kind of Mackerels You Would Like to Choose? 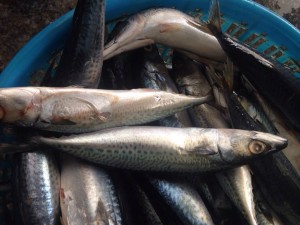 The type species for scombroid mackerels is the Atlantic mackerel, Scomber scombrus. These fish are iridescent blue-green above with a silvery underbelly and twenty to thirty near vertical wavy black stripes running across their upper body.

It might seem that the prominent stripes on the back of mackerels are there to provide camouflage against broken backgrounds. That is not the case, because mackerel live in midwater pelagic environments which have no background. However, fish have an optokinetic reflex in their visual systems which can be sensitive to moving stripes.In order for fish to school efficiently, they need feedback mechanisms that help them align themselves with adjacent fish, and match their speed. The stripes on neighbouring fish provide “schooling marks” which signal changes in relative position.

There is a layer of thin reflecting platelets on some of the mackerel stripes. In 1998, Denton and Rowe argued that these platelets transmit additional information to other fish about how a given fish moves. As the orientation of the fish changes relative to another fish, the amount of light reflected to the second fish by this layer also changes. This sensitivity to orientation gives the mackerel “considerable advantages in being able to react quickly while schooling and feeding.”

Mackerel range in size from small forage fish to larger game fish. Coastal mackerel tend to be small. The king mackerel is an example of a larger mackerel. Most fish are cold-blooded, but there are exceptions. Certain species of fish maintain elevated body temperatures. Endothermic bony fishes are all in the suborder Scombroidei and include the butterfly mackerel, a species of primitive mackerel.